Stories of Triumph and Inspiration

Hollister Continence Care is committed to people and helping empower their lives. It begins with user-driven research and development, coupled with a long-standing tradition of technical advancements and dedicated professionals who understand the importance of high-quality healthcare products to regain and maintain independent lives. The following testimonials are real members of the Hollister Continence Care community – product users, carers or clinicians – who are engaged in life. These human interest stories demonstrate our guiding principle: People First.

Bruce Springsteen is on the radio, singing “Dancing in the Dark” as the passenger van sprints along the German Autobahn toward Heidelberg. In the back seat of the van, sitting behind his parents, 17-year-old Timm Seestadt is reading a book in the dim light of the late afternoon. The Book of Basketball, by American sports journalist Bill Simmons, is not on the required reading list at Timm’s school in Hannover. But Timm’s life, in and out of school, revolves around sports. Timm dreams of one day being a champion on an Olympic stage where the medals around his neck will gleam with gold.

Yet, Timm is different from many other young athletes around the world who dream of Olympic medals. Timm was born with spina bifida and has been in a wheelchair since he was 4 years old.

“Six weeks before Timm was born, we knew that he had spina bifida”, says Annelie Seestadt, Timm’s mother. “The children’s hospital in Hamburg is very good, so we knew in advance that there was a problem, and that gave us time to prepare. We knew that we couldn’t look too far ahead, and we knew that we would have to deal with each day as it happened. The day Timm was born, he had his first surgery.”

The hospital staff in Hamburg put Annelie and Peter Seestadt, Timm’s father, in touch with a support group of other parents who have children with spina bifida. Seventeen years later, the Seestadts are still in touch with many of the people from that support group. “Those are the people who understand”, Peter says. “It was challenging in those early years, but we had help from the hospital and from other people who have been with us on this journey.”

Timm is the second child born to Annelie and Peter Seestadt. Timm’s brother, Klaas, is three years older than Timm and was born with no health problems and no complications. “People ask even today how we were able to cope with having one child who had such health problems”, Annelie says, “but we didn’t really see it that way. We didn’t see it as being so difficult. It was just life – just normal life.”

“Timm has always been in a hurry”, his father says, smiling. “From the beginning, Timm always liked to go very fast in his wheelchair. He would go very fast downhill – and with no brakes! He was only 4 years old and was already racing everywhere, so we were looking for something that would be more controlled.”

When Timm was 7, Annelie enrolled him in a sports workshop for people in wheelchairs. The workshop was led by one of Germany’s most famous Paralympic medalists in wheelchair racing, Heinrich Köberle. Since that first workshop, Heini and his wife Gudrun have not only become Timm’s mentors, but also his coaches, advisors, confidants and friends. It was after that first workshop that Timm got his first racing wheelchair – a gift from Heini and Gudrun Köberle.

“I thought that racing wheelchair was amazing”, Timm says. “It only had three wheels and looked really fast. I was very excited and I realised that’s what I wanted to do – to race and to go as fast as I possibly could.”

That first racing wheelchair was actually designed as an adult wheelchair, so Timm’s father had to modify it for his 7-year-old. Now that Timm is older, he and his father work together on the wheelchairs, extracting every bit of performance possible. It’s the only way Timm knows how to race.

Timm has raced his wheelchairs throughout Germany and in countries all over Europe. He has raced in Dubai, Ireland, Japan and the United States. Timm’s first international medal in wheelchair racing came in 2009 at the Junior World Championships in Switzerland – a bronze medal in 800 metres. In 2010 at the age of 16, Timm raced in his first marathon, the Oita International Wheelchair Marathon in Oita, Japan. Timm was the youngest racer to finish in the top 100.

“More than anything”, Timm says, “being involved in sports has helped me to get beyond my disability and has allowed me to focus on my abilities. I have learned from other people in wheelchairs how to live my life and how to stay healthy. I am grateful for my family and for the people in my life like Heini and Gudrun and other wheelchair athletes I have met. I have learned from all of them. Heini even taught me how to go down stairs in a wheelchair”, Timm says, his blue eyes sparkling as he grins widely. “I haven’t quite figured out how to go up stairs in a wheelchair yet – but I’m working on it.”

In school, Timm is a good student and is able to focus as much on academics as he does on sports. He attends the Lotto Sportinternat Sports Boarding School in Hannover. The school is one of Germany’s top academic and sports training academies and is focused on the sporting dreams, as well as the academic ambitions of young athletes who are either able-bodied or have physical disabilities.

“At this school”, Timm says, “students can design their own curriculum. I haven’t decided yet what I am going to study, but they have sports management and marketing, sports medicine and training, and even sports journalism. My main focus right now is being in Rio de Janeiro in 2016.”

Rio de Janeiro is the host city for the 2016 Summer Olympics and Paralympic Games. Timm Seestadt is planning to be there representing Germany on that international Olympic stage.

It is late at night when the Seestadts’ van finally arrives in Heidelberg. Timm and his parents are tired from the long drive, but they are ready for the next day and excited about the next race. It’s not simply about the Heidelberg Marathon; it’s about the race for life that they run together with love and with no regret. On race day in Heidelberg, Timm is once again on the podium, winning the silver medal.

“My mom told me that once when I was really young I asked, ‘Why me?’ Timm says. ‘Why am I in a wheelchair?’ Now I never ask that question. If there is one thing that sports has shown me, it has shown me that there is a good life in this world for me. I can be independent and I can live life on my own terms.” 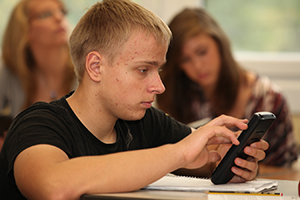 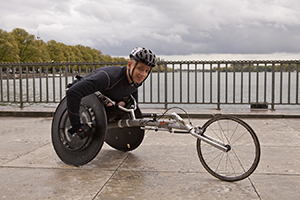 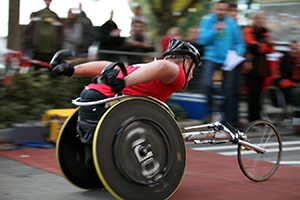 Unfortunately your browser is not supported by our video player. Please update your browser to view the videos on this site.